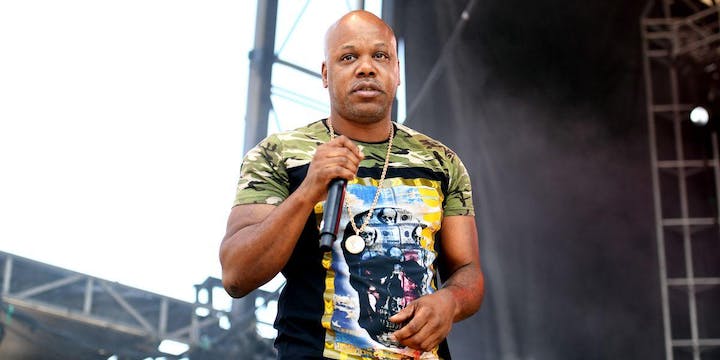 Too $hort (born Todd Shaw) is as much a myth as he is a man. The godfather of Bay Area hip-hop, the creator of pimp rap, the originator of the independent hustle, the controversial youth advocate and the Hugh Hefner of urban America, $hort Dog is a pioneer and a legend. His revered status is backed by an incredible track record that spans over thirty years in the entertainment industry and includes 19 albums—10 of which have earned gold and/or platinum plaques.

Short’s story is well documented. Born in LA, he moved to Oakland at the age of 14, where he met early collaborator Freddie B and began one of the most storied careers in hip-hop history. By 1981, the two had turned their rap hobby into a thriving independent enterprise by selling cassettes of Too $hort’s raps for five bucks a pop in the streets of East Oakland. He even had the ingenious idea of recording personalized rap tapes for those wiling to pony up some extra cash. Then, fresh out of high school, he signed to the local label 75 Girls, before founding his own label, Dangerous Music. By the time Born to Mack was released in 1986 and Jive Records came calling, he was already an underground west coast music fixture.

After over twenty years with Jive Records, $hort has come full circle and is back on the independent grind that first put him on the map. The difference this time around is that he’s selling mp3s and not cassettes and CD’s. The technology may be new, but he’s had his head buried in tech magazines for years, itching for the day he could set up shop again.

With Too $hort’s resume and list of accolades most would retire, but he’s far from finished. The freaky, over-the-top Vegas musical review era of his life is forthcoming he assures, but he’s not ready to step out of the booth yet. He had the biggest record of his career at the age of 40, in “Blow The Whistle,” so why not another classic at the age of 45 or 50?

Too $hort has always been a lot more intelligent and dynamic than the misogynistic stereotypes that confine him. One conversation with him makes this clear. Don’t get it twisted though; Todd Shaw is indeed a player and purveyor of East Oakland pimp culture. He even makes sure that the men in his live audiences know that their women might choose up on the next man, because real bona fide players show up to Too $hort shows. His raunchy freaky tales and signature refrain, “Biaaatch!” run the risk of ruffling feathers, but such vulgarity often comes off as endearing when paired with his candor, humor and iconic status. It’s important to remember that at least three generations have grown up on Too $hort’s music. 30 years into his music career, his catalogue isn’t often critiqued, as it’s woven into the very fabric of the Bay Area and hip-hop.

On $hort’s upcoming release, No Trespassing, his player’s anthems are sonically more diverse than they have been in recent years. He’s recently made a lot of fun up-tempo music, but his fans kept coming to him asking for the old school, mellowed out $hort Dog sound they grew up on. Lyrically that means that “bitch, suck my dick” anthems are balanced out by reflections on relationships, life and Harley Davidsons. Sonically that means that No Trespassing sounds smooth, mobbish and funky, but also more melodic than the sparse, bottom-heavy g-funk of his early work, or the raucous hyphy sound of his more recent work.

No Trespassing features collaborations with stars like Snoop, 50 Cent, Devin The Dude, Richie Rich and Twista with up-and-comers Dom Kennedy and Wallpaper along with young Oakland rappers Rico Tha Kidd and Beeda Weeda, but it’s San Francisco crooner Martin Luther who steals the show with his bluesy hook on “I Got Caught.” Luther sings, “I got caught making love to another man’s woman,” as $hort fills in the play-by-play like only he can. The sound is full, musical and refreshing, and is a great example of his return to the live instrumentation, story telling and old school flavor that made his name and music the stuff of legend.

No Trespassing is Todd Shaw’s best record in years and that is just the tip of the iceberg for what will be an exciting year for the Oakland, CA artist. He is also working on an iconic collaborative album with E-40 called The History Channel, writing a book comprised of anecdotes and stories from his life and times in Oakland, and also an Oakland-based movie on the horizon as well. That type of multi-medium ambition might intimidate emcees half his age, but it hardly phases $horty The Pimp. If anything, he’s determined to show the world how dope he still is on his own terms. And that hustler’s spirit is exactly why $hort won’t stop rappin’…