with special guests Water From Your Eyes and Dazy $25.00 to $30.00 Buy Tickets
Artist Page

Snail Mail with special guests Water From Your Eyes and Dazy at The Vogue in Indianapolis on Monday, May 1, 2023!

On her 2018 debut album Lush, seventeen-year-old Lindsey Jordan sang “I’m in full control / I’m not lost / Even when it’s love / Even when it’s not”. Her natural ability to be many things at once resonated with a lot of people. The contradiction of confidence and vulnerability, power and delicacy, had the impact of a wrecking ball when put to tape. It was an impressive and unequivocal career-making moment for Jordan.

On Valentine, her sophomore album out November 5th on Matador, Lindsey solidifies and defines this trajectory in a blaze of glory. In 10 songs, written over 2019-2020 by Jordan alone, we are taken on an adrenalizing odyssey of genuine originality in an era in which “indie” music has been reduced to gentle, homogenous pop composed mostly by ghost writers. Made with careful precision, Valentine shows an artist who has chosen to take her time. The reference points are broad and psychically stirring, while the lyrics build masterfully on the foundation set by Jordan’s first record to deliver a deeper understanding of heartbreak.

On “Ben Franklin”, the second single of the album, Jordan sings “Moved on, but nothing feels true / Sometimes I hate her just for not being you / Post rehab I’ve been feeling so small / I miss your attention, I wish I could call”. It’s here that she mourns a lost love, conceding the true nature of a fleeting romantic tie-up and ultimately, referencing a stay in a recovery facility in Arizona. This 45-day interlude followed issues stemming from a young life colliding with sudden fame and success. Since she was not allowed to bring her instruments or recording equipment, Jordan began tabulating the new album arrangements on paper solely out of memory and imagination. It was after this choice to take radical action that Valentine really took its unique shape.

Jordan took her newfound sense of clarity and calm to Durham, North Carolina, along with the bones of a new album. Here she worked with Brad Cook (Bon Iver, Waxahatchee). For all the album’s vastness and gravity, it was in this small home studio that Jordan and Cook chipped away over the winter of early 2021 at co-producing a dynamic collection of genre-melding new songs, finishing it triumphantly in the spring. They were assisted by longtime bandmates Ray Brown and Alex Bass, as well as engineer Alex Farrar, with a live string section added later at Spacebomb Studios in Richmond.

Leaning more heavily into samples and synthesizers, the album hinges on a handful of remarkably untraditional pop songs. The first few seconds of opener and title track ‘Valentine’ see whispered voice and eerie sci-fi synth erupt into a stadium-sized, endorphin-rush of a chorus that is an overwhelming statement of intent. “Ben Franklin”, “Forever (Sailing)” and “Madonna” take imaginative routes to the highest peaks of catchiness. Jordan has always sung with a depth of intensity and conviction, and the climactic pop moments on Valentine are delivered with such a tenet and a darkness and a beauty that’s noisy and guttural, taking on the singularity that usually comes from a veteran artist.

As captivating as the synth-driven songs are, it’s the more delicate moments like “Light Blue”, “c.et. al.” and “Mia” that distill the albums range and depth. “Baby blue, I’m so behind / Can’t make sense of the faces in and out of my life / Whirling above our daily routines / Both buried in problems, baby, honestly” Jordan sings on “c. et. al.” with a devastating certainty. These more ethereal, dextrously finger-picked folk songs peppered in throughout the album are nuanced in their vocal delivery and confident in their intricate arrangement. They come in like a breath of air, a moment to let the mind wander, but quickly drown the listener in their melodic alchemy and lyrical punch.

The album is rounded out radiantly by guitar-driven rock songs like “Automate”, “Glory” and “Headlock”. Reminiscent of Lush but with a marked tonal shift, Jordan again shows her prowess as a guitar player with chorus-y leads and rhythmic, wall-of-sound riffs. “Headlock” highlights this pivot with high-pitched dissonance and celestially affected lead parts – “Can’t go out I’m tethered to / Another world where we’re together / Are you lost in it too?”, she sings with grit and fatigue, building so poignantly on her sturdy foundation of out-and-out melancholy. On Valentine, we are taken 100 miles deeper into the world Jordan created with Lush, led through passageways and around dark corners, landing somewhere we never dreamed existed.

Today, in the wake of recording Valentine, Jordan is focused on trying to continue healing without slowing down. The album comes in the midst of so much growth, in the fertile soil of a harrowing bottom-out. On the heels of life-altering success, a painful breakup and 6 weeks in treatment, Jordan appears vibrant and sharp. “Mia, don’t cry / I love you forever / But I gotta grow up now / No I can’t keep holding onto you anymore” she sings on the album closer “Mia”. She sings softly but her voice cuts through like a hacksaw. The song is lamenting a lost love, saying a somber goodbye, and it closes the door on a bitter cold season for Jordan. Leaving room for a long and storied path, Valentine is somehow a jolt and a lovebuzz all at once.

Water From Your Eyes

There’s no perfect way to describe Water From Your Eyes; to relate the New York duo in absolutes would be imprecise and frivolous. Since 2016, the group’s clear-eyed approach to dance music has combined austerity and satire, abrasion and charm, with the pair plotting sonic trajectories on All a Dance and forgoing traditional album structure with Somebody Else’s Song. Having begun as an anti-pop project à la New Order and LCD Soundsystems, Water From Your Eyes quickly found themselves pivoting into a style-shaking act, combining art pop, trance, and dance punk into a reflective fusion of influence and genre. Nate Amos (This is Lorelei) and Rachel Brown (Thanks for Coming) delight in contradiction on their upcoming Wharf Cat debut, Structure. Water From Your Eyes wade into straight-faced sub-genres with tongue-in-cheek wit and undoubtedly know-how for their most staggering project yet.

Influenced by Scott Walker’s sole 80s release, Climate of Hunter, and the echoing works of the color-field painter Mark Rothko, Structure’s cavernous dance pieces serve as the hypnotic bedrock between spoken-word monologues, cinematic numbers, and an ostensibly cheery opener. The seven-minute-long epics “My Love’s” and “Quotations” are sprawling and borderline excruciating, with both tracks deploying sawtoothed loops and grooves capable of hypnotizing even the most passive of listeners. Like Rothko’s contradictory depiction of the static and kinetic, Water From Your Eyes invite listeners to chip away at Structure’s stoic facade, to take a closer look at its detailed handiwork and trace the cracks in the mirror.

Despite its titular implications and arty conceptual aesthetics, Structure is more lighthearted than it is self-serious, with the only actual “structure” being found in its tracklist. “The important thing to remember is that this is weed music,” Amos says. “There was not a single drop of work done in the recording, editing, or mixing process that was not preceded by a spliff.” Bitingly witty in their respective solo projects, both Rachel Brown and Nate Amos naturally apply humor to Structure, a record which reflects the band’s lock-and-key creative process. “It’s like solving a puzzle with a ton of different answers,” offers Brown, whose lyrics are plucked from their own journal and filtered into Water From Your Eyes’ musically calculated format.

When put together, Structure’s fragmental base only bolsters its effectiveness as a sequential whole. The opener, “When You’re Around,” was originally intended for a film that was never made, while “Monday” is a song for a film that doesn’t exist. Both tracks serve as eerie precursors for Structure’s paralleled sides. Avid listeners will revel in repeated plays to uncover the record’s melodic subtleties, rhythmic minutiae, and lyrical repetition. Structure is a first-class achievement in brutalist pop: it’s dreamy and dissociative, nuanced and hypnotic, and weaves together threads for listeners to unravel with each spin. 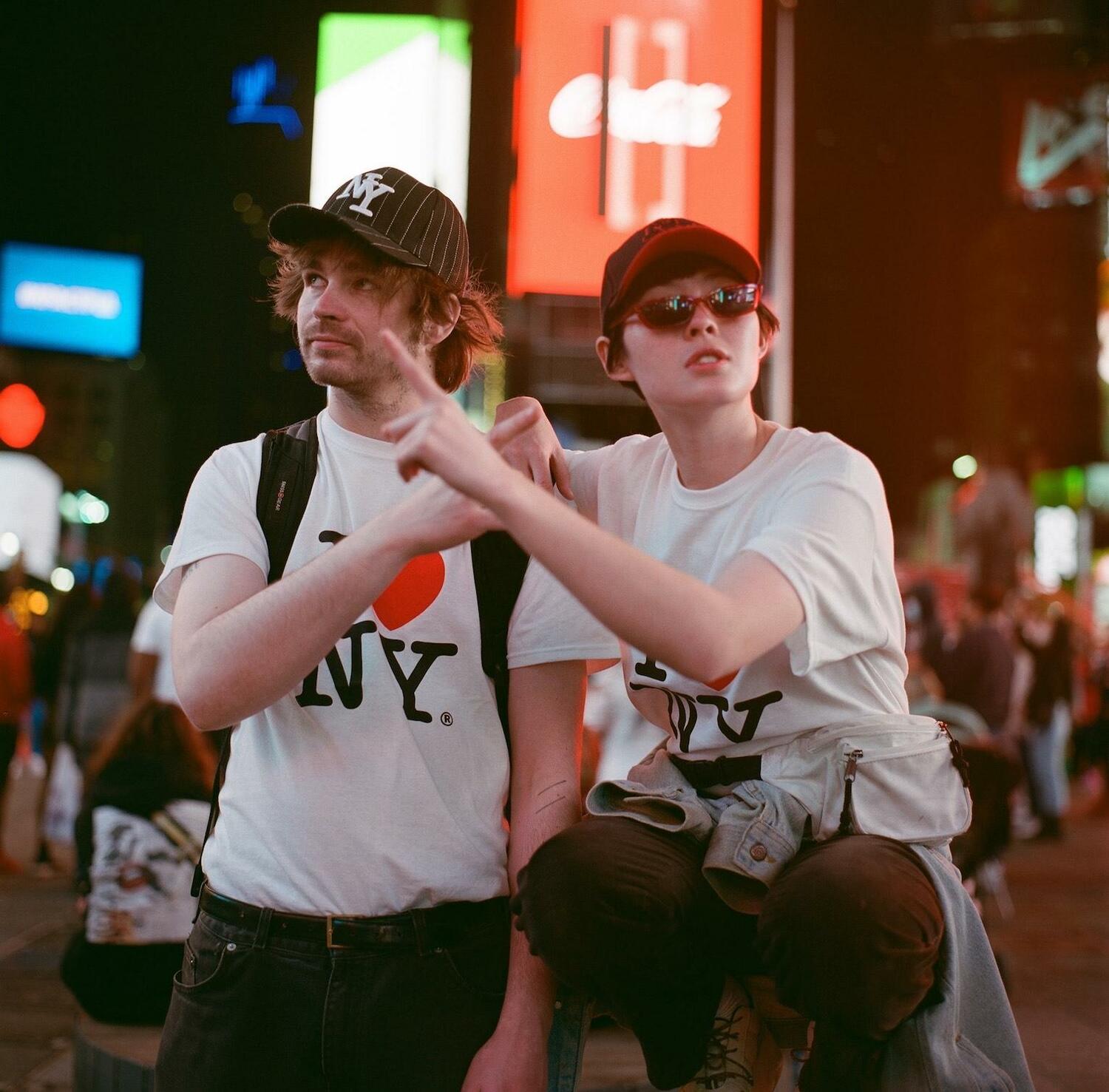 One amp. One mic. One person. Countless hooks. That’s the Dazy formula. Since first releasing the single Bright Lights b/w Accelerate in August 2020, Dazy mastermind James Goodson has been writing, recording, and releasing new music like a man on the hunt to find the best pop hook, and he won’t stop until he’s put all of them into his songs. Showcasing a unique set of influences, Dazy’s sound marries thumping drum machine beats, blasts of feeding back guitar, and sugar-sweet hooks into something that sounds like Godflesh covering Oasis—or maybe the other way around. With lean songwriting that recalls Teenage Fanclub but a home-recorded production style better suited for Big Black, Goodson builds a constant churn of abrasive, consuming noise and then makes it catchier than anyone else would ever dare to.

Dazy released two EPs, Revolving Door and The Crowded Mind, in 2021, the latter of which landed on Stereogum’s ‘25 Great EPs From 2021’ list.’ Ever-prolific, all of those songs and more appeared on Dazy’s August 2021 collection, MAXIMUMBLASTSUPERLOUD: The First 24 Songs (Convulse Records), which was also included on multiple year-end lists such as Paste’s ‘50 Best Albums of 2021’ and ‘40 Best Rock Albums of 2021,’ and The Alternative’s ‘50 Top Records of 2021’—in addition to garnering praise from Stereogum (“…sticky, fuzzy, overwhelmingly catchy power-pop, and it’s got hooks for days”), Bandcamp Daily (‘New & Notable’), and MAXIMUMROCKNROLL (“Absolutely ridiculous ‘90s college rock hook-laden pop”), among others.

Dazy also released a collaborative single, “Pressure Cooker,” with Militarie Gun in March 2022, which was praised by Pitchfork (“California hardcore meets East Coast fuzz-pop on this feel-good blast of ’90s-style alt-rock”), Stereogum (#1 Song of the Week), KEXP (‘Song of the Day’), The FADER, Revolver, The Guardian (UK), Brooklyn Vegan, and more—including the #5 spot on Paste’s ‘Best Songs of 2022 So Far’ list.

In August of 2022 Dazy returned again with the release of a new two-song single Rollercoaster Ride b/w Peel. The songs showcase both sides of Dazy’s noise pop dynamic and drew praise from the likes of Stereogum, The FADER, Paste Magazine, BrooklynVegan, and more. The new single also celebrates Dazy joining the Lame-O Records roster, so stay tuned for more to come.

SNAIL MAIL WITH WATER FROM YOUR EYES AND DAZY
MONDAY, MAY 1, 2023
21+
THE VOGUE THEATRE
INDIANAPOLIS, IN
TICKETS AT THEVOGUE.COM