Multi-platinum, 3x Grammy nominee Mystikal is back with his signature gruff sound and ready to shut the stage down at The Vogue in Indianapolis.

With a history as extensive as his rhymes, the American rapper Mystikal’s fame is as much linked to his roots with Master P and New Orleans as it is to his criminal record. Born Michael L. Tyler on September 22, 1971, Mystikal grew up in the 12th Ward of New Orleans, Louisiana. Mystikal stayed close to his New Orleans roots as he grew up and chose to work with local labels Big Boy Records and later Master P’s No Limit Records.

Early in his life, Mystikal showed little evidence that he would go on to be a world-famous rapper. After graduating from Walter L. Cohen High in New Orleans, Mystikal enlisted in the United States Army in 1988. He spent his years of military service as a combat engineer during the Gulf War. Mystikal was sent to military prison during his service, allegedly for being off base at a time when he should not have been. It was during this time that he crafted and honed his unique vocal delivery — one that he says was greatly influenced by the yelling of drill sergeants.

Mystikal debuted with the ten track album Mystikal, released on Big Boy Records in 1994. Leroy “Precise” Edwards produced the album and Jive Records later re-released the same material with several new tracks under the title Mind of Mystikal in 1996. The album rose to number one on the Top Heatseekers chart, a division of the Billboard charts set aside for new and developing artists.

Mind of Mystikal made its mark as a very personal album for the rapper. The additional tracks included on the re-release dealt with a considerable amount of retribution. After coming under fire on “Drag ‘em in the River” by U.N.L.V. and “Fuck Big Boy” by B.G., Mystikal took the opportunity to show what he was made of with the response track “Beware.” Mind of Mystikal’s “Dedicated to Michelle Tyler” addressed the brutal stabbing murder of his sister with whom he had collaborated on the track “Not That N***a” from Mystikal. Tyler was murdered by her boyfriend, Damion Neville, who happens to be the grandson of the Neville Brothers’ Charles Neville.

In 1997, Mystikal signed with Master P’s No Limit Records and released Unpredictable. This third release gave Mystikal a more solid footing with critics and the listening public. No Limit’s in-house production team, Beats By the Pound (now known at The Medicine Men), worked on the album as well. Unpredictable peaked at number three on the Billboard 200 and climbed all the way to number one on the Top R&B/Hip Hop Albums chart. The album is primarily lauded for two tracks — “Ain’t No Limit,” which rose to number 63 on the Hot R&B/Hip Hop Singles and Tracks chart, and “Murder 2,” which again deals with the murder of his sister Michelle.

In 1998, Mystikal released Ghetto Fabulous (No Limit/Jive), but it was teaming up with Busta Rhymes that year that put Mystikal on the right track toward finding his place in the rap world. While certainly finding success with his prior releases, it was after appearing with Busta Rhymes on “Iz They Wildin Wit Us & Getting’ Rowdy Wit Us?” off of Rhyme’s Extinction Level Event that Mystikal hit his stride.

Two years later, Mystikal put out Let’s Get Ready (2000 Jive), the album that would catapult him into mainstream rap relevancy. “Danger (Been So Long),” which featured pop/R&B star Nivea, became the number one single of June 2001 on the Billboard Hot R&B/Hip Hop Songs chart. Most notable from Let’s Get Ready is the track “Shake Ya Ass,” which used production from the hit-making team The Neptunes (Pharrell Williams and Chad Hugo). Let’s Get Ready debuted at number one on the Billboard 200.

The new Millennium has been filled with more legal drama than albums for Mystikal. His last album of new material was 2001’s Tarantula (Jive). The album fared exceptionally well and if it were not for the legal issues that arose soon after its release, it could have been a tremendous springboard for Mystikal’s recording career. Tarantula included the hit single “Bouncin’ Back (Bumpin’ Me Against the Wall),” which found critical acclaim for its use of jazz elements alongside Mystikal’s unique brand of rap. In 2003, the album was nominated for a Grammy Award for Best Rap Album and Mystikal was granted a Grammy nomination for Best Male Rap Solo Performance.

In 2001, Mystikal collaborated with Ludacris on “Move Bitch” from his sophomore album Word of Mouf (Def Jam South), and in 2002 with Lil Jon and The East Side Boyz with Krayzie Bone on “I Don’t Give a Fuck” from the group’s Kings of Crunk. The following year, Mystikal took a starring role alongside Lorenzo Lamas in the film 13 Dead Men, which is about a diamond thief framed for murder, a corrupt prison warden, and a grizzled inmate with a passion for justice.

On January 16, 2004, Mystikal was sentenced to six years in prison after he pleaded guilty to extortion and sexually assaulting his hairstylist. Mystikal and two bodyguards forced the woman to have sex with them and also accused her of stealing $80,000. A videotape of the crime surfaced at Mystikal’s home and put the nail in the coffin of the case. While serving time for these crimes, he received a concurrent sentence for tax offenses. He continues to serve his time for the sexual battery and extortion charges, though the tax conviction sentence has been served. His time has been spent at Louisiana’s Elayn Hunt Correctional Center. 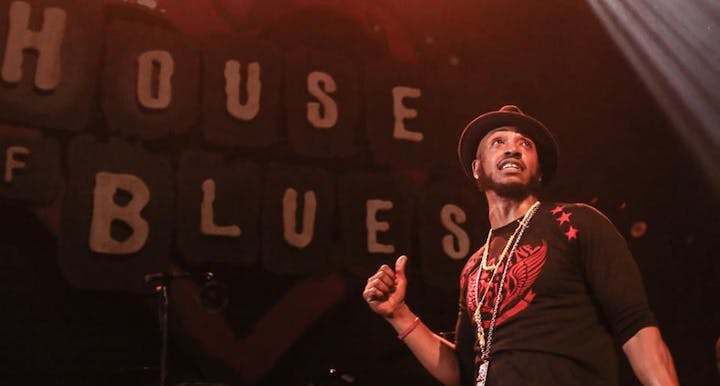 VIP Table upgrades available by emailing info@thevogue.com and by visiting or calling the box office from 12-5:30pm on weekdays.