This show has been rescheduled for Wednesday, August 5th.

“We’re a Mexican American band, and no word describes America like immigrant. Most of us are children of immigrants, so it’s perhaps natural that the songs we create celebrate America in this way.” So says Louie Perez, the “poet laureate” and primary wordsmith of Los Lobos, when describing the songs on the band’s new album, Gates of Gold.

The stories on Gates of Gold are snapshots of experiences that Perez and his band mates have had, based on where they are emotionally and how they respond to evolving life circumstances. “We live out loud most of the time and share our life this way, but then there are more intrinsic things that happen, and our songs are part of the way we react to them. We sit down and basically tell people what has happened. We certainly didn’t start this project with aspirations to create the musical equivalent to great American literary works.”

After celebrating their 40th anniversary with the cleverly titled 2013 live album Disconnected In New York City, the hard working, constantly touring band – David Hidalgo, Louie Perez, Cesar Rosas, Conrad Lozano and Steve Berlin – leaps headfirst into their fifth decade with an invitation to join them as they open fresh and exciting new Gates of Gold, their first full length studio album since 2010’s Tin Can Trust (a Grammy nominee for Best Americana Album) and second with Savoy/429 Records.

The dynamic songwriting, deeply poetic lyrics, thoughtful romantic and spiritual themes and eclectic blend of styles on the 11 track collection has resulted in an American saga in the rich literary tradition of legendary authors John Steinbeck and William Faulkner. Yet true to form, these typically humble musical wolves started in on the project without any grand vision or musical roadmap. Over 30 years after Los Lobos’ major label breakthrough How Will The Wolf Survive? – their 1984 album that ranks #30 on Rolling Stones list of the 100 greatest albums of the 1980s – their main challenge when they get off the road and head back into the studio is, as Berlin says, “trying not to do stuff we’ve already done. To a certain extent, we are always drawing from the same multi-faceted paint box, and we sound like what we sound like. We’re proud of what we feel is an honest body of work. We just want to keep finding new ways to say things.”

In the band’s early recording days – those years just before and after “La Bamba,” their worldwide crossover hit from the 1987 film which reached #1 on the U.S. and UK singles chart – they prepared for album recording sessions with top producers like T-Bone Burnett with pre- production that included multiple rehearsals and “outlining” what the project was going to be.

The more spontaneous approach to writing and recording that they took on their 1992 Mitchell Froom co-produced set Kiko still exists today; Rosas says, “When I listen to our catalog, doing things more spontaneously in the studio has led to some of our best work.” Unlike many bands that write, gather and catalog material between studio releases, Los Lobos prefers to create their magic on the fly when they decide it’s time to record. Perez says, “We never come in with a cache of 20 songs. Our thing is to write as we’re recording. It’s like starting with a blank canvass every time.”

The journey to Gates of Gold began with Hidalgo bringing in a batch of ideas, outlines and chord progressions with no lyrics. As he and Perez began fleshing things out, developing grooves, melodies and lyrical themes, Hidalgo, his son, drummer David, Jr. and bassist Lozano began tracking those tunes. The collection opens with the reflective, mid-tempo rocker “Made To Break Your Heart,” featuring female vocalist Syd Straw, whose vibe was partially inspired by Hidalgo’s love for Manassas, the early 70s blues-country-rock band created by Stephen Stills.

The moody, atmospheric rocker “When We Were Free,” whose lyrics of what Berlin calls “beautiful melancholy memories” are underscored with the increasing drama of booming drums and distorted electric guitars. Filled with hypnotic sound effects and cool vocal and guitar distortion (created via an eight track analog Cascam cassette recorder!), the soulful, reflective “There I Go” touches on the universal search for what Perez calls “something meaningful, though we’re not always sure what it is.”

Further Hidalgo/Perez collaborations include “Too Small Heart,” a raw and raucous nod to both Los Lobos garage band roots and the wild abandon of Jimi Hendrix; the easy grooving folk- rocker “Song of the Sun,” which taps into the elements of life (water, fire, earth) and creation myths while touching on the way we choose to live in the present; the slow burning blues/rocker “Magdalena,” inspired by the Biblical Mary Magdalene and visions of flowing robes; and the folk-influenced, image rich rocker title track “Gates of Gold,” whose lyrical abstractions allow for multiple earthly and spiritual interpretations.

Perez says, “When I first started listening to the original demo Dave had, the music spoke to me of rural America. The impression the lyrics give could refer to the afterlife, i.e. the “pearly gates,” but I also was thinking about the immigrant experience, the promise of a new life as one travels across borders, all the thoughts a person making that daring move might have connected to the dream of what America is. Our parents all wondered what lay beyond those gates. On a personal level, it’s a reflection of where my band mates and I are in our lives. We’re all over 60 now and looking towards the horizon at our own mortality. We think often about what we’ve contributed and what’s left. I don’t know who the protagonist of the song is, but he’s looking at those gates from a distance because what lies beyond is a mystery.”

As Hidalgo and Perez began collaborating on their songs, Rosas, as per his trademark “lone wolf” songwriting approach, took his basic tracks to his home studio to complete the handful of tunes that flesh out the set. The singer, guitarist and mandolin player’s pieces include the raucous and bluesy, garage band fired jam “Mis-Treater Boogie Blues,” the swampy folk-rock blues lament “I Believed You So” and the swaying, sensual Latin Cumbia-styled “Poquito Para Aqui.” The sole cover on Gates of Gold is the other Spanish language tune, “La Tumba,” an accordion laced folk piece connected to the Mexican Norteno tradition (related to polka and corrodes) whose theme, says Perez, is very dark, “about following your lover to the tomb.” It’s very familiar to fans as a frequent staple of Los Lobos’ live performances.

Back in 2003, when Los Lobos was celebrating the 30th Anniversary of their humble beginnings as a garage band in East L.A., Rolling Stone summed up their distinctive, diverse, freewheeling fusion of rock, blues, soul and Mexican folk music: “This is what happens when five guys create a magical sound, then stick together…to see how far it can take them.” Originally called Los Lobos del Este (de Los Angeles), a play on a popular norteno band called Los Lobos del Norte, the group originally came together from three separate units. Lead vocalist/guitarist Hidalgo, whose arsenal includes accordion, percussion, bass, keyboards, melodic, drums, violin and banjo, met Perez at Garfield High in East LA and started a garage band. Rosas, who had his own group, and Lozano launched a power trio. “But we all hung out because we were friends and making music was just the natural progression of things,” says Perez, the band’s drummer. “Like if you hang around a barbershop long enough, you’re going to get a haircut.”

Berlin is Los Lobos’ saxophonist, flutist and harmonica player who met the band while still with seminal L.A. rockers The Blasters. He joined the group after performing on and co-producing (with T-Bone Burnett) their breakthrough 1983 EP …And A Time To Dance. Los Lobos were already East L.A. neighborhood legends, Sunset Strip regulars and a Grammy winning band (Best Mexican American/Tejano Music Performance) by the time they recorded How Will the Wolf Survive? Although the album’s name and title song were inspired by a National Geographic article about real life wolves in the wild, the band saw obvious parallels with their struggle to gain mainstream rock success while maintaining their Mexican roots.

Perez, once called their powerhouse mix of rock, Tex-Mex, country, folk, R&B, blues and traditional Spanish and Mexican music “the soundtrack of the barrio.” Three decades, two more Grammys, the global success of “La Bamba” and thousands of rollicking performances across the globe later, Los Lobos is surviving quite well — and still jamming with the same raw intensity as they had when they began in that garage in 1973. They don’t get in the studio as often as they did a few decades ago – Tin Can Trust came four years after their previous album of all originals, The Town and the City – but when they do, the results are every bit as culturally rich, musically rocking and lyrically provocative as they were back in the day.

“It’s not always the easiest thing finding time away from our touring schedule and families to find time to make an album,” says Berlin, “but recording Gates of Gold, I have to say it’s great to be back in the proverbial saddle again. It reminds us of the fun we have had making new music over the years, and it’s nice to have the opportunity to create something of value.”

Perez adds, “I find that the most interesting part of songwriting and tracking a new album is the differential between the way a song sounds to you at 2 a.m. and the way it may hit you when it’s 11 a.m. and it reaches the light of day. We may love it just as much or we may realize we can do better. It’s always a process of discovering more about ourselves and the music we love to make. It’s not always easy getting started again, but I love that moment in the process when the songs start to take on their own life and we can let the kid, so to speak, run out onto the street and start figuring things out for himself. The way songs reveal themselves to us during these periods of writing and recording is my favorite part of the Los Lobos recording experience.” 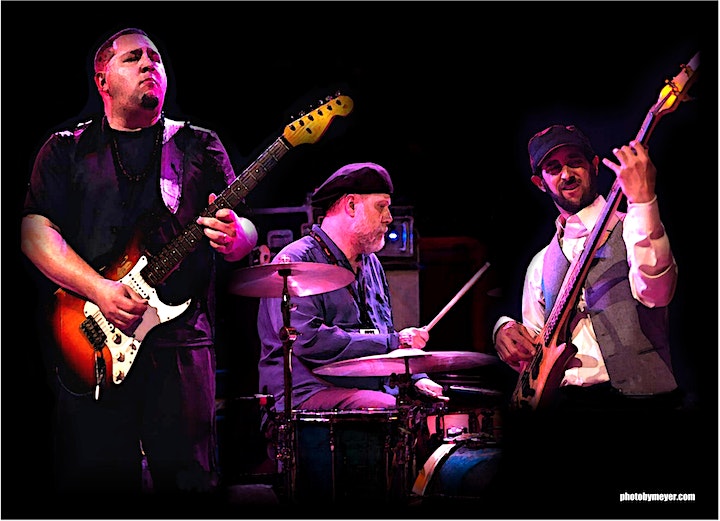 They were recently honored with an award for 25 years of keeping the blues alive by the Fishers Blues Festival (Indy) and performed for 5000 of their biggest fans w Robert Cray Band!

They also performed a sold out show w BB KING on his final Indiana show, and recently with BUDDY GUY (for the 4th time), Robert Cray (5th time), and Los Lonely Boys!

With 6 CD releases on Mojo Hut Records, 100’s of Thousands of touring miles, and several Thousands of performances under their belts….

Winner of the International Blues Challenge, Indianapolis, IN.

LIVE! (from the Slippery Noodle Inn) and Timing is Everything CDs were picked up for national distribution by all Meijer and Best Buy stores and named “Top Selling Artist”, by Audio Recon, MMSS’s digital distributor. Audio Recon is responsible for placing MMSS tunes on iTunes, Emusic, Rhapsody…