with The Dead Deads $30 Buy Tickets
Artist Page
Candlebox will be live at The Vogue Theater in Indy on September 21, 2021

Throw out any preconceived notions about who Candlebox is. Wolves, the band’s seventh album, is rife with brutal lyrical honesty and songs that run the gamut from dirty rock stompers to timeless, radio-ready pop-rock tunes. Wolves captures the live energy of a band embracing all its influences and coalescing them down into the most potent form. “These are songs that I love that the band loved. We didn’t stop ourselves from recording anything if we dug it; we allowed each song to dictate to us what it needed musically, instrumentally,” explains singer Kevin Martin. Wolves is a modern rock album that also contains “that really sparkly acoustic, Radiohead kind of dreamy guitar and ethereal stuff; we pulled from everything that inspired us, from Neil Young to brand-new bands.”

Candlebox teased the upcoming LP in August 2020, releasing Wolves’ energized “Let Me Down Easy.” an aggro, blues-based rocker with a booming bass and edgy guitar riffing. The cut was co-written with old Seattle pal Peter Cornell, Chris Cornell’s older brother. As for the vibe: Martin knew he “wanted that song to feel and sound like Black Rebel Motorcycle Club.”

In 2021 came “My Weakness.” The pop-tastic gem is “kind of guttural and like ‘The Summer of ‘69’ and Bruce Springsteen tunes; it’s one of those love songs where you can feel the band just wants to take off with you the whole time.” Reminiscent of chart-topping ‘80s pop-rock that has stood the test of time, Martin knows that “My Weakness” may be perceived as a departure for Candlebox. But that’s the point.

Working with producer Dean Dichoso in Los Angeles’ legendary Henson Studios for Wolves, Martin’s goals included creating a “different record for Candlebox. I don’t want to fall into bad habits like overthinking in the studio. Dean and I had long conversations about music and songs, about what inspired me on albums like Neil Young’s Rust Never Sleeps, those really loose rock and roll albums where artists didn’t follow a program, where there was no real formula.”

The first official single from Wolves is “All Down Hill From Here,” co-written with Christopher Thorne of Blind Melon, another old friend of Martin’s. In the frank autobiographical tune, Martin sings, “Spent half of my life in a rock and roll band … They say ‘the harder they come, the harder they fall’ / Well I hit it pretty hard babe, still reelin’ from it all /And I made it to the peak babe, but it’s all downhill from here now.”

Wolves is not the record of a band on its downslide, but rather a strong aural statement from musicians who are exploring, reinventing, and creating music to make themselves happy. There’s zero resting on the considerable laurels of Candlebox’s hit singles and albums. And the band is inviting fans, old and new, along for the ride. 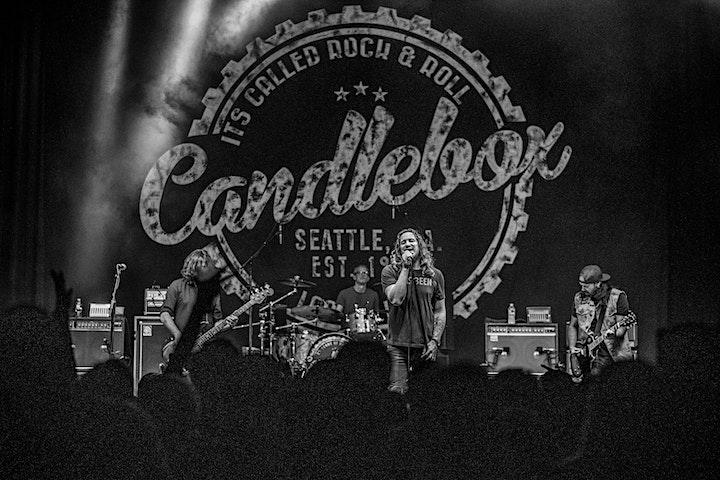 It’s a journey that began in 1991 in Seattle, where Candlebox formed, and soon thereafter incited a record label bidding war in Los Angeles. The lineup went quadruple-platinum with their 1993 self-titled debut on Madonna’s Maverick Records and released two more acclaimed albums (1995’s Lucy and 1998’s Happy Pills). The singles “Far Behind,” “You” and “Cover Me,” became ubiquitous fan and radio favorites. But after nearly a decade of hard road work, the band went on hiatus in 2000. Candlebox then regrouped with a 2006 tour, putting out Into the Sun in 2008, followed by 2012’s Love Stories & Other Musings.

Candlebox’s sixth studio album, 2016’s Disappearing In Airports, had a fresh modernity, a vibe that is amplified and broadened on Wolves, so named for a myriad of reasons. “It comes from where we are as humans right now, and what we’ve become,” Martin says. “Yes, there’s beauty in these wolves, but there’s the pack mentality, and that lone wolf mentality on the other side.”

Wolves isn’t a political statement, it’s more a musing on humanity. “I think that as a society we’re headed in a really dark direction. We’ve become so ‘about ourselves,’ forgetting that we’re all in this together,” Martin says. “We’ve lost that whole concept of being kind and looking out for one another; now it’s just dog eat dog.”

Music, however, brings people together both physically – in the pre- and post-pandemic times, that is – and emotionally. And Wolves, with songs that tap into a more raucous vibe while being equally powerful on personal love songs, sets off many emotional triggers. For instance, the irresistible “Lost Angeline” relates a story about the early days of Martin’s relationship with his wife. Working that emotion into the recording required a “live looseness in the studio. It was one vocal take for the verses,” says the frontman. “Lost Angeline” would be at home on a roots-rock playlist. “We didn’t stray away from anything; if the song sounded Americana, we went there; if a song sounded progressive, we went progressive- we didn’t try to stay in our lane, if you will.”

The timeline of Wolves began well before the shitshow of 2020, kicking off in mid-2018, with approximately three months to write and record. Alongside drummer Dave Krusen (who joined Candlebox in 1997); lead and rhythm guitarist Brian Quinn and bassist Adam Kury, Wolves marks guitarist Island Styles’ studio recording debut with the band. (Robin Diaz, who has toured with Candlebox in the past, will take over drumming duties from Krusen when the pandemic status allows for the band to hit the road in support of the record.)

The chemistry Candlebox conjured playing live in the studio is undeniable and electric. And Martin couldn’t be happier with the outcome. “It can be challenging to be an artist who has enjoyed great success, and then down the line, still has great fans, but never really achieves that great success again,” Martin observes, echoing the lyrical story of “All Down Hill From Here.” “A lot of our friends in bands are in that position now. It’s a story I think a lot of people can relate to, not only musicians. “But,” he concludes, referencing the Wolves’ tune “Don’t Count Me Out,” “like the boxer who’s on his last legs, he still has an opportunity. You really can’t count anyone out.”

Nashville-based rock band The Dead Deads are cherry-picking everything good about grunge, hard rock, indie, classic metal and punk, and creating memorable and fun alternative music for rock fans across generations and genres. They are that “up-and-coming” band that other touring artists have named as a favorite for years. Many of their own heroes including Lzzy Hale (Halestorm), Tom Petersson (Cheap Trick) Corey Taylor (Stone Sour/Slipknot), and Shaun Morgan (Seether) have praised them as one of the most refreshing new bands touring today, and they have conjured a wildly engaged fan club—The Dead Corps. With X’s painted over their eyes, the band and fans bring excitement and infectious energy to every show.

What began as a jam in a south Nashville warehouse in 2013, has grown into an undeniable phenomenon. Heads bang as metal and grunge riffs are coaxed into pop hooks. Innocent child-like vocals are interrupted by screams and the occasional brutal growl, as finely crafted wordplay forces unexpected stops and odd time signatures into submission. The unexpected becomes the earworm.

The Dead Deads explore sounds from 90’s bands like The Pixies and Sonic Youth, to modern metal bands like Mastodon and Baroness, all while keeping their grunge/punk rock roots. They name Failure, Bjork, NOFX, Pavement, Weezer, Helmet, Beck and The Pixies in amongst their hugely diverse list of influences. 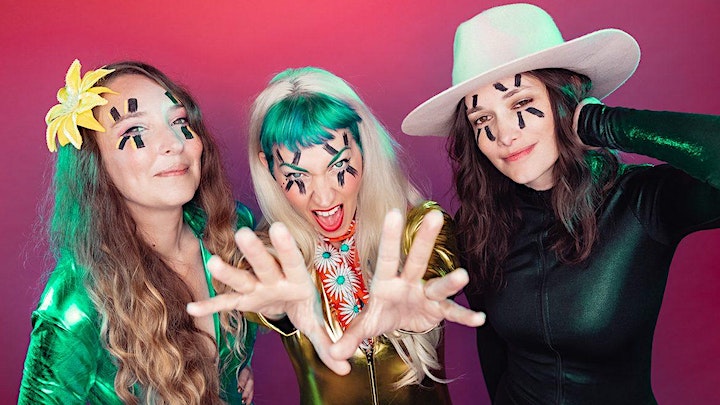